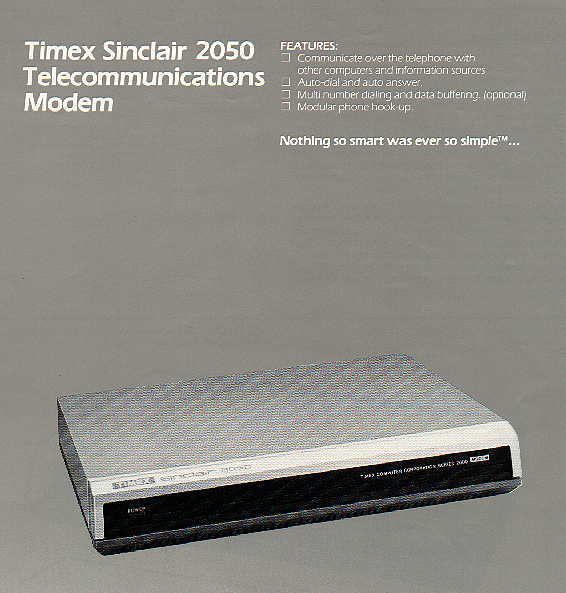 One of the most eagerly awaited add-ons for the Timex Sinclair computers was the modem. Timex had announced a modem that was scheduled for release in November of 1983, which was to be compatible with both the TS 1000/1500 (ZX-81) and TS 2068. This was dubbed the TS 2050 Telecommunications Modem. Unfortunately, Timex went out of the computer market before they received the first shipment. After a short delay, Westridge Communications, a division of Anchor Automation, released the modem that they were producing for Timex, and the Timex Sinclair 2050 is now known as the Westridge 2050. 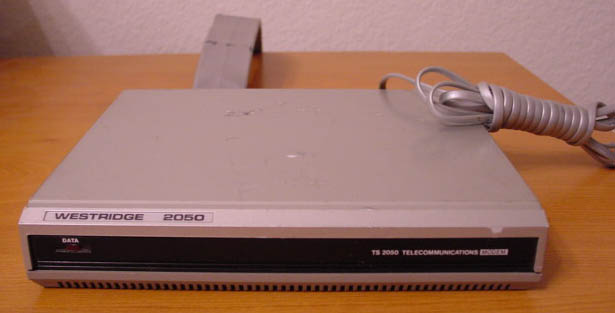 The cassette that comes with the modem (SMART TERMINAL I) has the TS 1000/1500 software on one side, and the TS 2068 software on the other. An advanced version of this software, called SMART TERMINAL II, allows for the storage of up to fourteen telephone numbers with log-on instructions, and the ability to upload and download. It attaches to either computer via a 12 inch RS232C cable which ends in a Timex interface (built in) which then connects to the edge expansion bus. The connector is of the piggy-back type so that other peripherals may be added. The set-up for both computers is identical, with only the software differing.
It uses the 8251 UART chip, and was capable of 300 baud. A simple modification that bypassed the analog modem portion on the unit permitted it to function as an RS-232 port that could accept a faster modem, as well as other serial devices.
The modem connects to Ma Bell’s (the American version of BT) equipment directly,
and has a phone jack built in so that you may connect a telephone to your modem,
although that is not necessary. In fact, you do not need a telephone at all. Set-up
of the modem takes just a moment and you are ready to go.